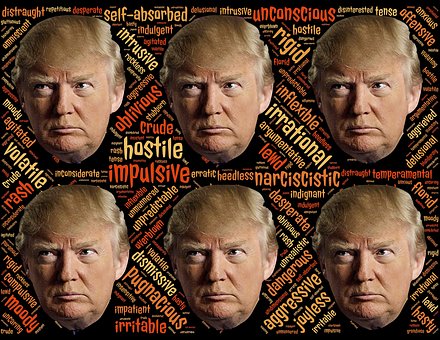 When I first started this blog back in August, my first post was entitled “Moral Outrage”. Since then things have gotten decidedly worse in my opinion. The behavior of the current occupant of the White House seems to become more bizarre; his ability to focus on serious matters of importance to the nation; and his fixation with twitter comments which express an alternate reality seem to baffle not only the political pundits, political media commentators, and presidential historians, but almost everyone else outside of his 33%-35% hardcore base. In fact a Quinnipiac University poll released yesterday found that the majority of Americans found him “unfit to serve as president”. The results of the poll can be found here: https://poll.qu.edu/national/release-detail?ReleaseID=2487

I ended that first post with a thought that I believed the current occupant of the White House was amoral. His inability to know the difference between right and wrong; essentially the lack of conscience and a moral compass. While I suppose that sounds rather harsh, I still believe that. Furthermore, my graduate studies and degree are in mental health counseling. When I was in practice and later moving on to teach the elements of practice in that disciple, I was a pretty fair diagnostician. After several more months of observing the behavior of our president, I believe there is more we can learn about his bizarre and disturbing behavior.

Some have interpreted this as narcissism. I believe that is at the root of trying to understand this president. He meets most of the features of the Diagnostic and Statistical Manual of Mental Disorders of the American Psychiatric Association for Narcissistic Personality Disorder. The Mayo Clinic provides a description of the symptoms and features of NPD:

Allow me to make my case by reviewing these features used by mental health practitioners:

Feature 1. Having an exaggerated sense of self-importance.

Trump definitely meets this feature. His unabashed arrogance and the continual focus on himself in even the most mundane pronouncements affirms his sense-of-self as being someone of great importance. The use of superlatives to describe his actions such as “the greatest ever in history”, “the best health care plan for everyone”, or “our economy is booming under my administration” are but a few examples.

Feature 2. Expecting to be recognized as superior even without achievements that warrant it.

Here again Trump has a history of claiming achievements that aren’t warranted. He insists he is an unbelievable businessman worth billions of dollars, yet he refuses to release his tax returns. He bankrupted four major businesses with no personal cost to him. He claimed he “won the most electoral votes since Reagan”, but he didn’t. Other former presidents have also received more electoral votes than Trump. George H. W. Bush won with 426 electoral votes in 1988. Bill Clinton won 370 votes in 1992 and 379 in 1996, and Barack Obama won with 365 votes in 2008. And on it goes. Trump lives in an alternative reality known only to him.

Feature 3. Exaggerating your achievements and talents.

Quite simply more of the same from Feature 2.

Feature 4. Being preoccupied with fantasies about success, power, brilliance, beauty or the perfect mate.

I suspect there are several factors in the etiology of Trump’s disorder, not the least of which was growing up in Queens, NY. Queens in the 50’s and 60’s was a typical middle to upper middle class borough of the five New York City metro area. With a couple of million dollar loan from his father he ventured onto the island and began to build his brand. An article definitely worth reading by Carl Cedarstrom in the Guardian can be found here: https://www.theguardian.com/commentisfree/2017/feb/27/not-lies-donald-trump-truth-norman-vincent-peale It explains a lot that relates to what Feature 4 is about.

Feature 5. Believing that you are superior and can only be understood by or associate with equally special people

It is this feature that has haunted Trump most of his life. He desperately wants to be recognized internally by associateing with the social elite, the powerful, and the wealthy and influential. Thus, he initially appoints Wall Street tycoons, hedge fund entrepreneurs, former military generals (especially Marine generals), invites and mingles with the “beautiful people”. With a little study of Trump’s life you can make a very extensive list.

It is quite obvious that Trump remains in campaign mode. He has attended more “rallies” and appearances before large crowds in his first 250 days of his presidency than any former president I know of (please correct me if I am wrong). Most of these appearances are before adoring crowds of his most ardent supporters and allows him to bask in their applause and approval. Beyond that he is not tolerant of anyone in his administration who is not “loyal” to him. Translated that means agreeing and approving of him. Those who don’t or appear to encroach or outshine him; he fires or reassigns them.

Feature 7. Having a sense of entitlement

At this point, given the features above and a short reading of his adult life, it seems obvious this president has a sense of entitlement.

Feature 8. Expecting special favors and unquestioning compliance with your expectations.

The most discernible demonstration of the president expecting special favors, is his obsession with the Russia investigation. When she refused to enforce his Muslim ban, he fired Sally Yates as acting Attorney General, the Obama holdover until Trump could fill her post, Later when she resumed her post as Deputy Attorney General, her testimony encountered numerous roadblocks from the Trump Administration and his supporters in Congress. See this story from the Associated Press:

In addition, there were several other instances of Trumps seeking special favors to absolve himself from the Russia investigations (for examples: his request of Comey in private, Sessions recusal, and his conversation with Republican Senate leader Mitch McConnell). Trump is definitely not used to anyone questioning his desires or credibility.

Feature 9. Taking advantage of others to get what you want

There is a litany of Trump’s behavior to take advantage of others to get what he wants. The bottom line here is his motivation to do so. It is all about money. He makes agreements with contractors in his construction projects or making improvements in his existing properties. When they are done he either refuses to pay the invoice or pays substantially less than was agreed to. The Trump University scam that caused 6,000 former to sue Trump to recover some of their money. The hiring of foreign green card workers to work in his hotels and resort properties for less wages than legal American citizens. The Trump casino bankruptcies (four or six depending on how you count them) cost his employers hundreds of thousands dollars they had invested in their 401k retirement accounts. Here is a blunt reporting on how that happened and how Trump reduced his personal debt and walked away with over 2 million dollars scot-free:

Trump definitely is/was capable of taking advantage of others for his own financial gain.

Feature 10. Having an inability or unwillingness to recognize the needs and feelings of others

Trump is not capable of this feature. He does not have the psychological ability to identify with the feelings, or attitudes of another person or group of persons. Trump only appears to show concern for others when it benefits him. He orders federal relief for the recent hurricanes in Texas and Florida, but fails to public acknowledge the hurricane in Puerto Rico for several days and finally orders relief nine days later. The difference? Puerto Ricans are American citizens but they cannot vote in our elections, plus Puerto Rico is primarily a “brown skinned” territory. Hardly anyone Trump would have an interest in. His impulsive and callous denigration of persons who criticize him or don’t agree with him has been apparent since he announced his intention to run for president. His inability to admit he was wrong in these instances is quite telling. His attitude of seeing women, not as persons, but as objects is a further indication of this feature. Finally, Trump is incapable of feeling or demonstrating genuine empathy for others.

I would like to make several points as I conclude this post. Diagnosing mental disorders is not easy, nor is it an exact science. Any effort to understand human behavior takes time and a set of special skills. While I believe Trump could meet the definition of Narcissistic Personality Disorder, I could not ethically make that diagnosis without interviewing him which is highly doubtful that I or any other mental health professional would be able to. His sense of himself as superior rightful arrogance seem normal to him.

One of the challenges in the diagnosis of mental disorders is determining which mental disorder a person is presenting, particularly with personality disorders. In the case of NPD, there are some features of Antisocial Personality Disorder that overlap NPD. You can see what these are here:

Some of these clearly apply to the current occupant of the White House. Regardless of his arrogance and sense of superiority, I am still inclined to believe the president is impaired. For me that does make him unfit to serve as president of the United States.